So some people have posted a lot of prompts for writing, and I thought I’d try to add my feelings on inspiration to the mix. Obviously, you’re about to get some ecology. I’m so sorry. I’m going to intersperse some photos, because I’m also enamored with the beauty of bees, and hope the photos might inspire you even if the material doesn’t. I am just clearly really into the idea of using poetry to overcome the typical ‘textbook’ barrier people have with science, and would love to engage others in that process of ‘recreating’ science.

The following are some Apis – honeybees on some backlit honeycomb. Fun fact: almost every bee you’ve ever met is a female. This has to do with the unique reproductive strategy of eusocial/colony bees (which I will get into later in the post). But yeah. The colonies are basically biological sororities. I love bees – I think I love them like Arianna loves hermit crabs. So I’d like to tell you some stuff about them, and then see if any of you can/are interested in turning some of the science into lines of poems. I would love it if everyone wrote a line or two, and we made a collaborative poem, because that would be SO eusocial of us (basically, so like the colony system that my favorite bees use) but I’ll settle for just making the post and seeing if anyone bites. Here is a Bombus – bumblebee. Just as an adorable fact (these guys are probs my favorite), that little black spot between the wings will go bald during most bumblebees’ lifespans; the little hairs get worn away over time as the bumblebee brushes against things. Most of the bees I’m working with in my research have serious baldspots.

So most bees engage in a principle known as eusociality.

Eusociality – the highest form of organization of animal sociality defined by three major characteristics:
– reproductive divisions of labor (there is a sterile/non-reproductive caste and a reproductive caste)
– overlapping generations of adults
– cooperative brood care

Ants, bees, termites, naked mole rats, S. regalis (a parasitic shrimp), aphids and thrips are all eusocial – most of the eusocial organisms are found to be insects. Eusociality results in behavior like this:

Look at the adorable pollen dusted bee below. Also a Bombus. Awwww.

So according to Darwin’s Theory of Evolution, each individual acts to increase it’s own fitness – meaning each individual acts to survive and reproduce and pass on its own genes. So how does this highly developed eusocial form develop with sterile workers? After all, there is no fitness to being sterile so it seems like all evolutionary change would resist this model of social structure.
The prevailing theory is that of Kin Selection – selection that favors traits that benefit one’s relatives at the cost of one’s own fitness. This has to do with the concept of direct fitness (i.e. your offspring) vs. indirect fitness (your family members’ offspring that carry some, but a lower percentage, of your genes). These two forms of fitness together make up your inclusive fitness. Kin selection scientists argue that Darwin’s Theory means that each individual will act to increase their own inclusive fitness, not just their direct fitness. This helps to explain altruism in humans too.

Hamilton’s Rule was hypothesized to add some mathematical support to the idea of kin selection.

And this rule really does form the basis of our understanding of eusocial insects because ‘r’ is special for eusocial. This is because most (not all but MOST) eusocial insect societies are haplodiploid.

(Leafcutter bee above; they make circles in leaves – we have a ton in Geneseo.)
Imagine you have a Queen (who is diploid) with two genes – AaBb – and a male (who is haploid) like this – AB. When mating, the male passes on 100% of his genes – AB – to all of his offspring, because he only has one copy. So every diploid daughter is going to have an ‘AB’ in her genome. Now the Queen does that whole meiosis deal, so her genes recombine. Let’s say they’re having two baby bees so we’ll randomly assort for the mama bee to pass on: Ab and AB (other possibilities would be: aB and ab).

(Above: Sweat Bee – we have those around here, too)
The father being haploid instead of diploid means there’s no chance for his genes to be passed on non-identically; therefore all sister bees are 75% related (50% from dad, and 25% from mom).

This is huge – breakthrough – because it means that sisters in eusocial insect colonies are more related to one another than to their own mother. This is why (according to Hamilton’s rule) sterility existed – because it is more beneficial for the sisters to help the Queen reproduce and make more sisters that are 75% identical to them in genome than it is for them to reproduce themselves (and be only 50% related to their offspring).

Seriously, you can’t make this shit up. Science is so swag. 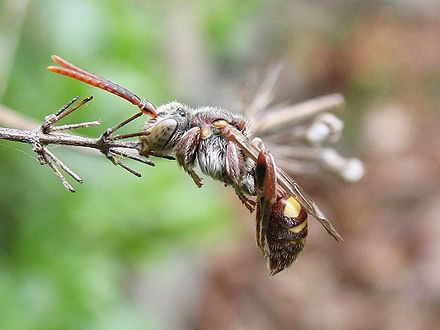 Last fun fact – the pollen collecting parts of a bee are known as a ‘scopa’; coming from the Latin, for broom.

3 Replies to “A Scientific Writing Prompt”